In the project that they developed for a southern region of Russia, OSA Architects use multilayered facades that create an image of seaside resort architecture, and, in the vein of the latest trends of today, mix up different social groups that the residents belong to.

At the client’s request, the location of the project cannot be disclosed. The construction site is situated in a seaside town, between a bay and a park. On one side, it is delineated by a street; on the other side, it borders on chaotically standing private residences. The main challenges- and the prime movers of the creative search, for that matter, were the prominent terrain, whose specifics were not taken into account when the land use plan was developed, a height restriction, and a task to include into this complex 250 municipal apartments, which the city later on was planning to sell on favorable terms to young doctors and teachers.

According to one of the chief architects of the project, Vasily Krapivin, the “waltzing” with the construction regulations and the technical and economic performance metrics in this project was one of the most difficult ever. Originally, the client conducted a closed-door competition, asking the company to revise one of the versions that consisted of three elongated buildings. In order to break away from associations with “the Great Wall of China”, OSA proposed to remove the low-rise massive urban villas, which did form transparent space, but were turned down due to the wrong type of apartments that they yielded: in order to make the floor work to its full potential, the architects would have had to make really large apartments, and the square footage of the municipal apartments, accounting for about a half of the total number, is strictly limited. A city block by the seaside

Then, in order to make sure that one will see an interesting silhouette watching the complex from the water, the architects drew five buildings, connected by terraced sections, which would have created an impression of one volume “flowing” into another. However, the client was not ready for such an expressive solution. Ultimately, they settled on a composition of five separate buildings with an equal number of floors: they do not obscure the city block with a massive wall, keeping the feeling of space, and differ from one another with their facades, designed in different styles.

A city block by the seaside

All of the facades are multilayered but each one is slightly different. The two buildings standing on the corners of the land site have their “underlying layer” of the wall - on the sketches it is executed from a material with a wood grain pattern- showing through the balconies and terraces, covered by a white openwork screen that gives protection from the sun and covers the air conditioning units, helping to ensure that the carefully drawn facade would not change with time: everybody knows that local residents, in order to protect from the heat, like to glaze their balconies and use sunlight protection film.

The two other side-end buildings feature rounded corners and a contrasting dark screen that is rendered almost weightless by perforation, which at the same time creates an effect of an intricate shadow, the kind that is cast by tree leaves. Such construction will probably be perfect for curly plants to cling to.

The central  building does not have the screen layer; it is a snow-white volume with sculptural ledges of balconies and terraces that also provide enough shade.

For the facades, the architects are planning to use outside-mounted large-block elements that will not “overburden” the pattern with the seam lines. This creates a certain challenge because almost none of these elements are exactly alike. When it came to facade coating, the architects settled on fiber panels, opting out of using metal, which would have created an inappropriate “industrial” effect, as well as out of stucco, which does not go well together with cantilevered structures. The scheme of the facade. A city block by the seaside Still another issue that the architects had to address was the format of integrating the social-support apartments. The solution was hard to find; both the client and the architects debated whether to place the municipal housing in a separate building, or in the bottom or in the top floors - ultimately coming to the solution where the social support apartments are integrated in each house and they have a common territory.

However, the requirements for the municipal housing are relatively rigid - these apartments could not have large recessed balconies- and, hence, continuous lines of terraces were impossible. Therefore, the irregular white grid at some points stands out before the ledges, at some points conceals the recessed balconies, and at some points adorns the wall, generally creating an effect of “porous” sponge-like volumes, characteristic for southern architecture. 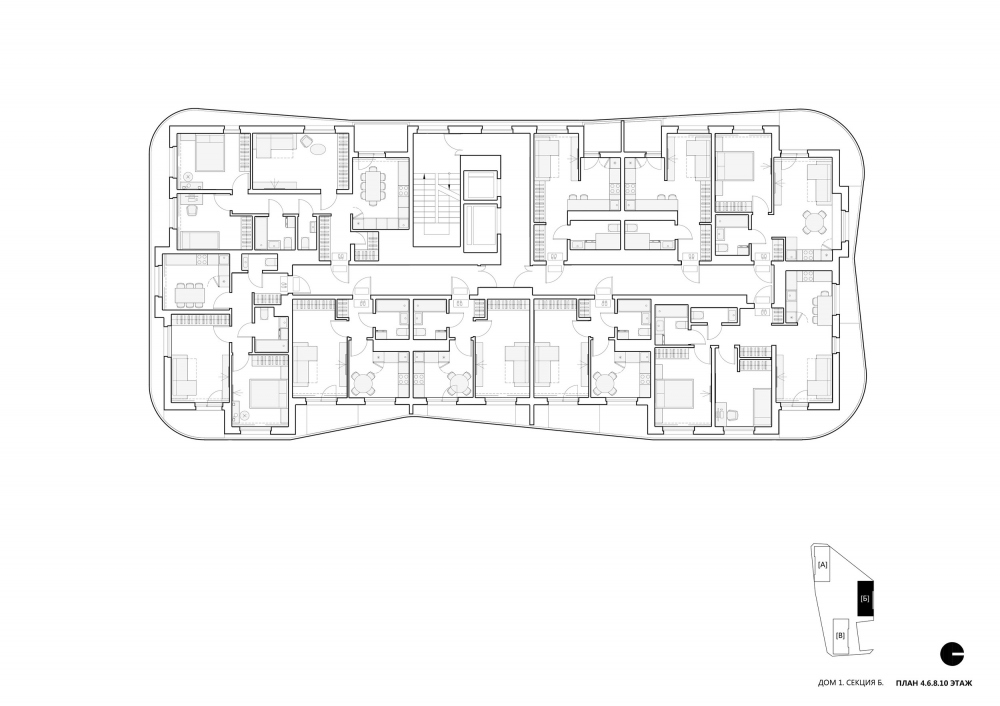 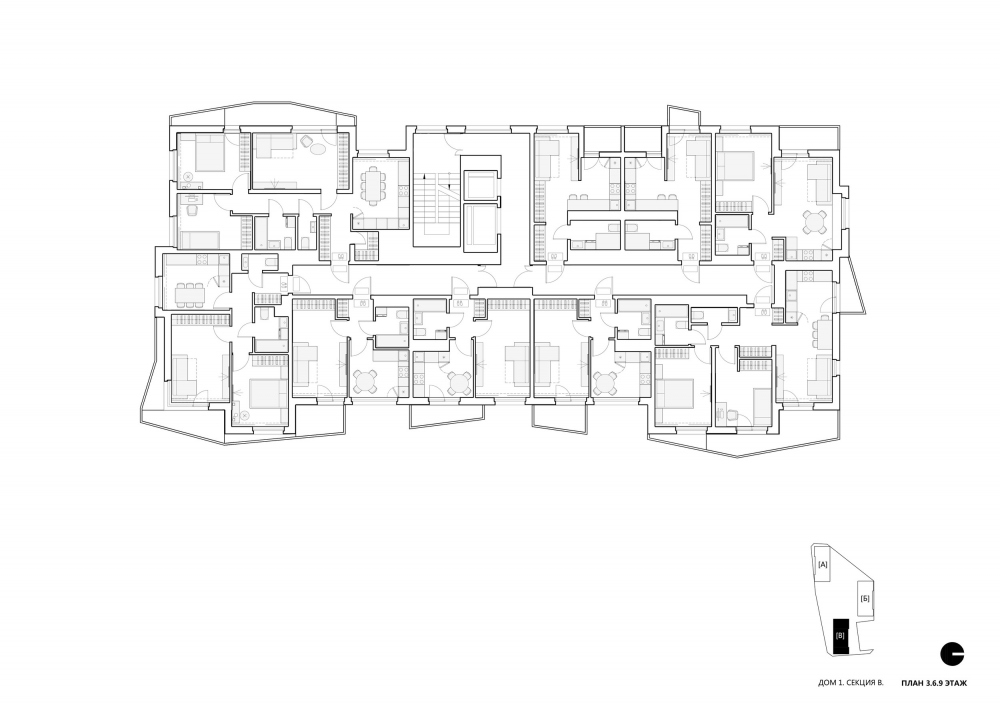 The complex is situated on a sea shore and on a hill, the height difference being 5 meters - according to the master plan expert, Maria Tsareva, the relief allowed the architects to create an interesting and multilayered arrangement of space. Each house has an end-to-end lobby: on one side, the entrance is situated on the second floor, on the other side on the first floor, these entrances leading to spaces of different degree of privacy - either to the street outside or to the elevated yard. One of the entrances leads to an underground parking garage- situated on the bottom level, it does not even need a ramp. The master plan. A city block by the seaside

Thanks to the ingenious facade design, the new housing complex is standing every chance of becoming the centerpiece of the area, without violating the cozy scale of the environment. The perspective renders show that the buildings do not intrude into the skyline but inscribe themselves into the context very neatly, forming a more integral view from the waterfront. The light and ethereal architecture resonates with the atmosphere of the seaside town like a small chalk mount on the sea shore - and the sea is indeed splashing two steps away.
Text by:
Translated by Anton Mizonov