The competition for the project of “Pokrovsky” housing complex, which is to be built in Izhevsk in the stead of the former gardeners’ non-commercial partnership, was won by Saint Petersburg’s MAYAK: Russian contextual nostalgia shows through the seemingly endless layers of metaphysics. 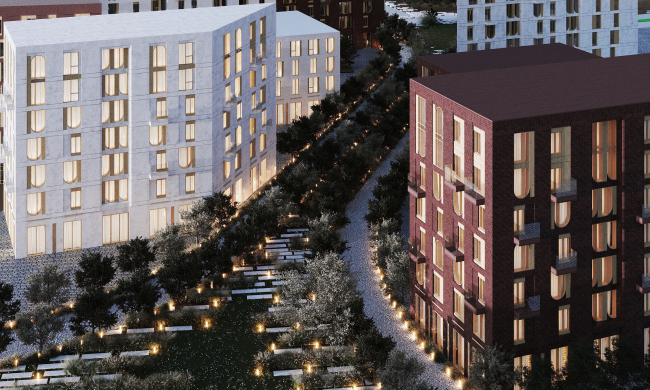 The competition for the best project of “Pokrovsky” housing complex to be built on the 10th Oktyabrya Street in Izhevsk was announced in October by the Udmurt branch of the Union of Russian Architects.  The former gardens community was to give way to a set of urban residential blocks. The contestants’ task was to think through the functional zoning of the territory, come up with a planning and volumetric solution, accentuate the town planning significance of this land site, and create a new landmark of the Bummash district, which was built in the 1960-1970’s. The competition restrictions included a height limit of 25 floors, no less than 9 floor plan options, vehicle-free yards (with no underground parking garages either), and a park.
The organizers got a total of thirty projects submitted by architects from Russia, Netherlands, Ukraine, Kazakhstan, and Belgium. The prize pool amounted to 750 000 rubles.
Below we are featuring the winning project. It was submitted by Saint Petersburg’s architectural firm MAYAK (Lisa Brilliantova, Alexander Meshin, Galina Voitenko, Dmitry Burkalov, Anastasia Ostrova). The projects that scored the second and third places, as well as the works by other contestants are available here. 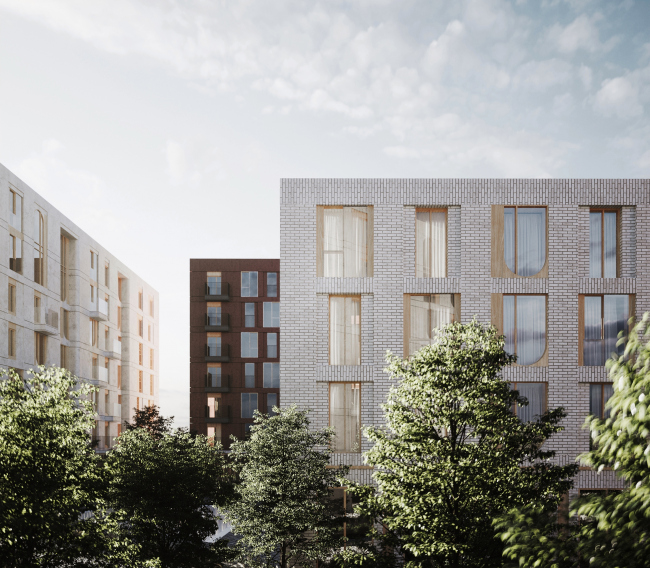 The architects wanted to breathe a new life into the Bummash territory, at the same time preserving the identity of this area. One of the peculiarities of the local construction is the fact that the grid of its axes is different from that of the city center. One of the competition tasks was to make sure that the project does not highlight this difference but softens it.
The territory is divided into seven city blocks – six residential ones, the seventh being essentially a parking lot. The blocks are situated in accordance with the grid of the axes of Izhevsk’s central part, which also coincides with the direction of the main thoroughfare, the 10th Oktyabrya Street. All the blocks are pierced by a “big green river” – a park with a large number of lawns, creeks, and recreation areas. The park will be also accessible to the residents of the nearby districts but the inner privacy of residential blocks will still be ensured. The main point of attraction becomes the open square situated in the center of the green artery. It is planned that there will be lots of shops and cafés here. 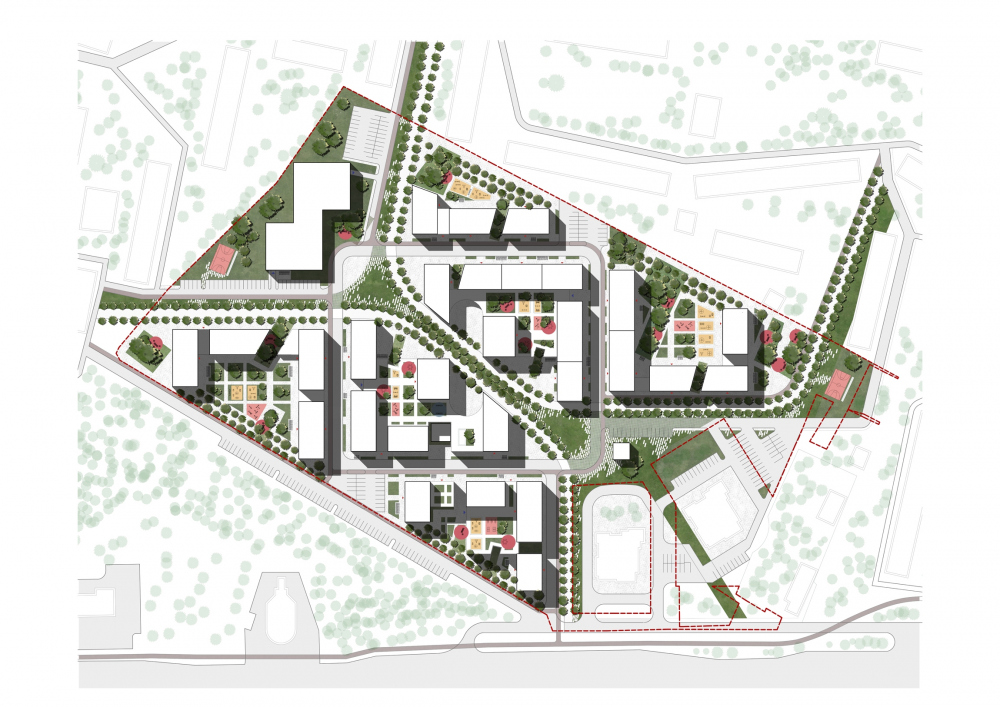 The façades are decorated with light-colored stucco and glazed bricks of white and deep red colors. The picture is completed by window frames and their binding of light-colored wood – one may think that the windows of the new houses reflect the old countryside life hobbyists’ dreams about respectable countryside villas. Immediately, Anton Chekhov’s “Cherry Garden” comes to mind, along with the “Russian Jam” by Lyudmila Ulitskaya. This contextual theme is obviously too strong, and, in order to stop it from dominating the entire project, the authors “estrange” this narrative with scenic surrealism – they take most of the arched windows and turn them upside down. One must admit that this is a technique that is rather popular nowadays: at some places, the arches stand across from one another, like some peculiar kind of push-pull and at some places they almost disappear, only leaving fragments of themselves. It looks like today pretty much everyone is tired of arches of the usual kind, ones that “stand on their feet” – and this is how a “mirror-flip” façade appears, something like a reflection of buildings in the water. Or maybe this is the image of a Venetian palazzo, rebuilt a thousand times and sticking in people’s memories only thanks to its reflection in the water. We will note here that, among other things, the inverted version of the most classic motif makes it look lightweight and, therefore, unobtrusive. The contextual meditation is supported by the contest brief: it even contained a requirement to keep a few sites of the former garden community construction-free. In the MAYAK project, a few garden sites turned “open air museums trapped in their epoch”. The garden theme continues in the creation of hedgerows made of small fruit trees on each side of each block. And, finally, just as the brief stipulated, the architects came up with ten floor plan options. 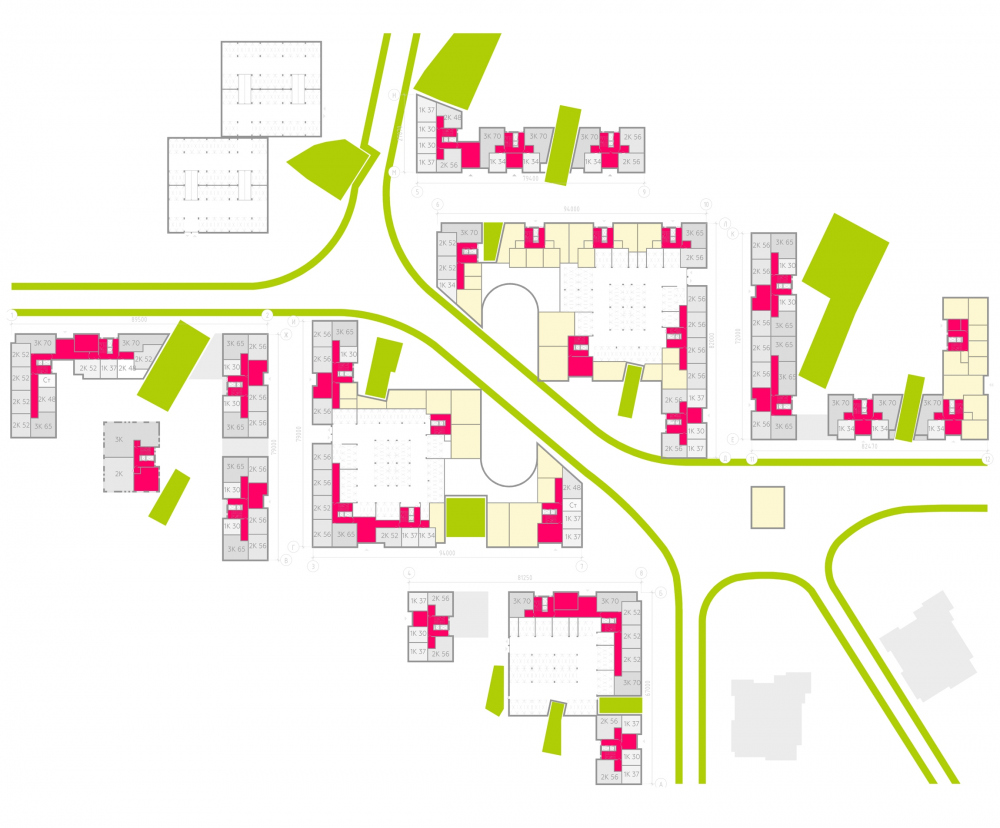 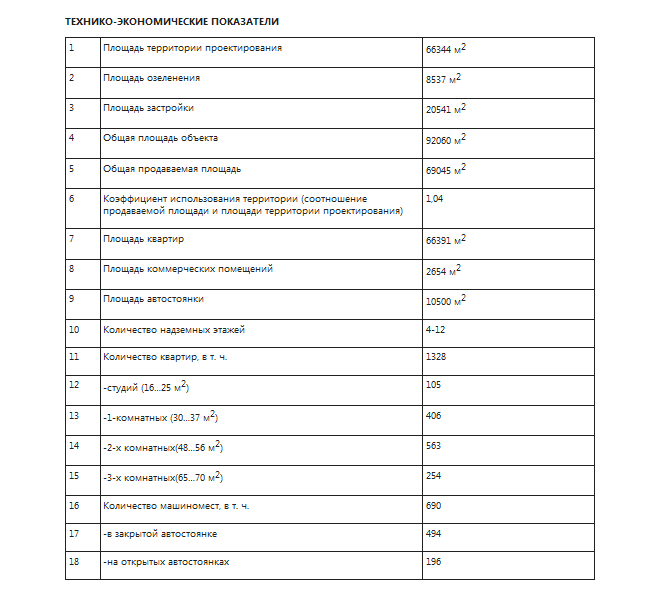