Blank Architects have changed the outer image and the inner content of a shopping mall in Moscow’s area of Otradnoe, turning it into a converging point of the public life of the neighborhood. It is hard to overestimate the significance that a large shopping mall has for the surrounding residential areas, all the more so if these are situated far away from the city center. Such complexes have long since outgrown the status of a mere shopping mall: people come here to watch a movie, have a bite to eat, skate at the skating rink, entertain their kids, and generally have a family outing on a weekend; the number and the quality of the offered services grows by the year, and these malls more and more can be described by the fashionable term of a “life hub”. Which, luckily, coincides with the interests of the owners of the shopping malls whose goal is to attract the potential buyer by any means and keep him inside the walls of the mall as long as possible. 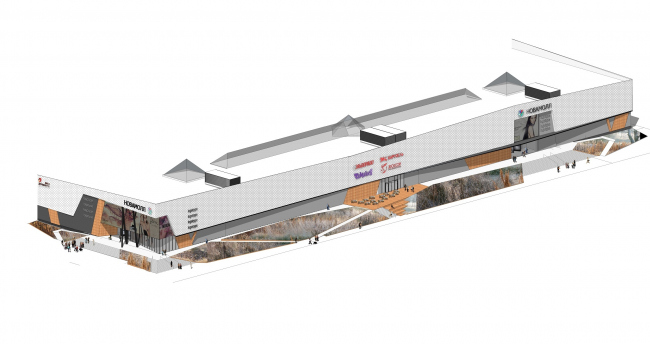 The “Golden Babylon” in Otradnoe is a fine example of such a phenomenon. Or, rather, it would have been one, had it not been for the yawning gap between the morally and physically outdated building and the requirements of a modern city. Located in a strategically advantageous location between a park and a metro station and surrounded by numerous residential buildings, the shopping mall not just studiously ignored its surroundings – it additionally shut itself out from the world outside by a dull fence running along its entire perimeter; one would even have a hard time trying to find an entrance to it. Therefore, the primary objective that Blank Architects set for themselves, when they got the commission for modernizing and rebranding this mall, was to open it up to the city by forming a new attractive and transparent infrastructure.

Particularly difficult was the task of adapting the outdated structures of prefabricated concrete to meet the needs of the new functions. The volumetric columns on the façade masked the elements of the already existing framework, changing which was out of the question. The new concept also provided for a new reformed system of entrances. The main entrance – the one, which is closer to the metro station, from the side of the Khachaturyana Street – was moved closer to the corner of the building, this corner being additionally opened at the expense of the new façade structure. Now it can be seen from the Dekabristov Street; there is a large LED screen above it. Due to the fact that the visitor traffic is maximum here, it is planned that in font of this entrance there will be a pedestrian square with all the appropriate landscaping elements. The second entrance – from the side of the parking lot – was, of course, left intact; the façade is also slightly raised here, and a small media screen is installed. However – and this is one of the main innovations – the project by Blank Architects provides for an opportunity for getting into the shopping mall directly from the park. For this, the architects build a staircase leading directly to the food court on the second floor: the steps lead to a small terrace where the cafe tables will be placed in the summertime.

In addition, one will be able to get inside the building through the cafeterias on the first floor – these will also have pass-through layouts. Thanks to this, the mall will draw inside the people that initially did not plan on any kind of shopping; there will also appear an opportunity for buying a cup of coffee to go on the way to the metro station. “The main theme of the façade design is the connection to nature, and specifically to the nearby park – shares the architect Daria Guzun – For this reason, we designed it as much as possible in the eco-architecture tradition, basing its decoration on the elements that reflect nature”. The top floor, which forms a cantilevered structure of varying width hanging over the three main façades, is coated with colorless metallized panels with triangular perforations – these symbolize the image of the tree leaves. The color neutrality allows the panels to, on the one hand, to merge with the environment, and, on the other hand, to reflect the surrounding scenery, because the interesting geometry generates a constraint play of light and shade. At the bottom level, i.e. “beneath the foliage”, a logic theme of tree trunks appears – it can be traced in the texture, in the color, and in the shape of the wooden insets that alternate with gray aluminum panels and stained glass windows. As a result, if one is to use a bit of his imagination, he will be able to see the bulk of the shopping mall (which now has become visually much lighter and more transparent) a direct continuation of the park, an image of a coppice, not of the summer kind, however, but a winter coppice with exposed trunks and snow-covered treetops. Staying true to their principle of thinking beyond the perimeter of the project that they design, Blank Architects not only came up with a proposal for landscaping the immediate surrounding territory but also submitted to the client their suggestions on renovating the park, which, in their opinion, could also become much more modern and comfortable than it is now.

Significant changes were made to the inside layouts of the mall. The main innovation consists in the fact that a significant part of the second floor is now occupied by the “Moi Dokumenty” (“My Documents”) center for processing citizens’ legal affairs – which makes the project even more multifunctional. In spite of the fact that the center took up about 2400 square meters, there is still room for a hypermarket, boutiques, and a food court double the size of the old one; plus, the architects were able to find room for numerous recreation areas in the shopping gallery: benches and soft zones where one can charge his smartphone, use a Wi-Fi connection or just visit with his friends. The single space of the shopping gallery alternates with atriums with skylights; some of the building got a third floor.

“When we were doing the interior design – comments the architect Alexandra Rasina – we used very tactile eco-friendly materials, such as wooden lamellae, carpets and soft fabrics. Here you will see a lot of light tones and greenery, including natural grass and trees that can be grown indoors”. Unlike the façade, the inside design of the mall uses bright colors as well: fragments of pure green or yellow fix the visitors’ attention on the highlights of the interior. Together with their colleagues from the Norwegian firm Bleed, the authors of the project also developed the identity of the new brand – together with the old image of the mall, the name of “Golden Babylon” also had to go – i.e. the architects did a full-scale rebranding project, creating the new format of this shopping mall practically from scratch. This is a whole new level in the company’s career. 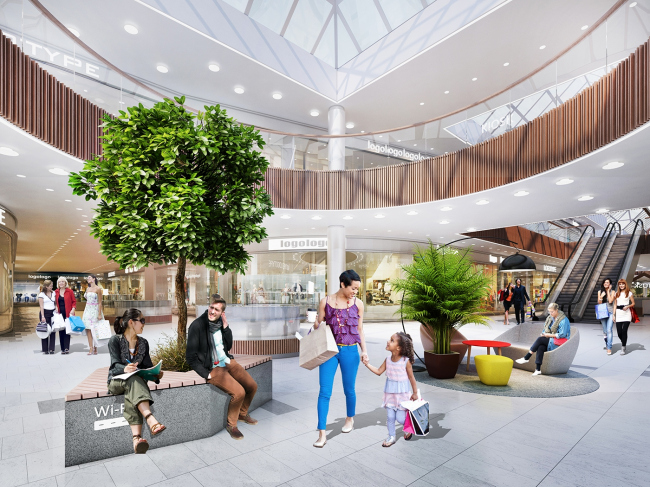 According to the head of the project, Vladimir Tikhonov, the fact that the mall is situated at the joint of busy underground and overland arteries, a park and a housing area, is essentially what makes this project so different and at the same time so complex. Today, however, this reformed shopping mall – which, by the way, already got the award of the Architectural Council of Moscow in the “retail project” nomination – not only fits in nicely with its diverse context but can also deservedly claim the role of the hub where all the “power lines” come together, the status of the connecting link between the traffic flows, residential areas, and an island of nature in the densely populated megalopolis.
Text by: Lukasz Kaczmarczyk, Magda Kmita, Vladimir Tikhonov, Lilya Aronova
Translated by Anton Mizonov 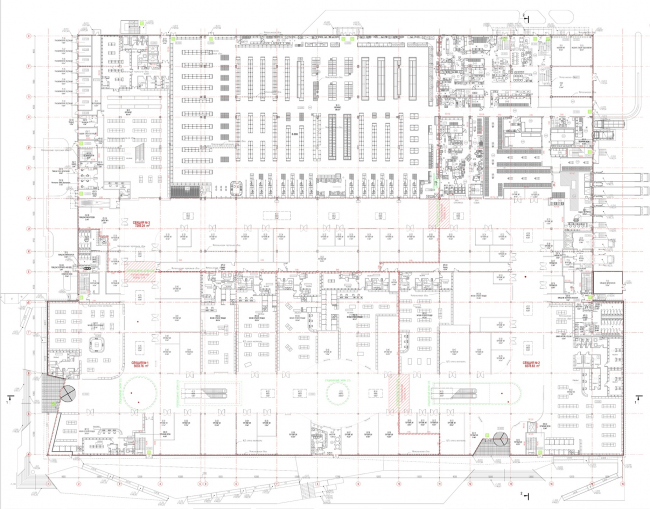