Recently the architectural bureau ADM has been working on rather complex and unusual project – reconstruction of a commercial apartment building of the beginning of 20th century into ultra-modern "A" class office building. The main difficulty is requirement to save the historical façade while full changing of the "inside" according to the last technical requirements. Uniqueness is in treatment of "modern part", in the very core of which there is hidden curved and sparkling with different colors glass atrium.

The neoclassical commercial apartment building, constructed on the project of architect G. A. Gelrikh in the beginning of 20th century, is located in Schepkin street, which is parallel to Mira prospect. Later after the house got side constructions, uninteresting and lacking any decor. The neighboring houses 18 and 24, and also 25 and 13 in Schepkin street, and the house 19 in Gilyarovskogo street are also pieces of historical development of the city block. As soon as it is façade that is shaping image and space of the house in its surrounding, the only right idea was to save the neoclassical façade in reconstruction work of Gelrikh's house. To keep only a façade and attach to it another construction with two levels of the underground car parking is a complicated engineering task. During the construction facade will be specially supported, simply “hang” over the ground.

The house will totally change the lay-out, side constructions will be demolished and the yard space between them will be built up. New object will occupy the entire site and will be precisely entered in its borders, close enough adjoining to the neighbours. For this reason in order not to leave the house 19 in Gilyarovskogo street without daylight, the new volume became graded, this shape got its upper part and its plan from the yard side. Height of historical part of the building is 5 storeys and the new volume located behind varies from 5 (its right part) to 7 storeys.

The three new facades architects made modernist, but with obvious flavor of art-deco or even of rational modern. There is much glass in them, but transparent surfaces are lined atop with thin verticals of light yellowy rosy-coloured stone. These stone strips "grow" out of flat stone basement and "grow" into horizontal stripe above – as if in the stone prism there were cut high and frequent rectangular apertures. Interfloor drafts slightly balance this ode to verticalism, however they "are drowned" in surface of glass – so verticals prevail.

Thin and strict grid of stone and glass facade may remind the Central telegraph Rerberg (1925-1927) or his Northern insurance society (1909-1911). As we see, the method equally belongs both to the tenth, and to the twentieth years of the last century – so there are enough reasons to consider as a refrence to historical context of the saved neoclassical facade. Strictly speaking, it is very likely in 1910th the house could get a similar extension.

The yard facade is divided into few extending and stepping back forms, this also makes it easier to accept it in the company of surrounding development. The house ceases to look the huge integral block (what is actually) – and it seems group of the buildings done in one style.

Plan of the new building will consist of two parts – rectangular in the place of commercial apartment house extended along Schepkin street, it is tapered from one side by the wall of very close historical "neighbor", and a completely new yard part, also rectangular in outline, but narrower so its practically unseen from street. There is an oval atrium is in the centre between them – the main innovative part of the kernel of the project. This atrium is very complex in its plastics, it is twirled like a tornado, pierces all the storeys of the building, bends to the hall’s side and somewhat grasps an entering one into the huge sparkling tube. Dynamics of its diagonal twirling does not develop deep into the building, does not spread, but is gathering into a powerful bunch of force lines go through the construction.

Generally speaking, this metaphor of a whirlwind in the center of an ordered structure cut by a nonlinear core stream, looks witty. In fact how a tornado formats? On border of warm and cold air streams. And here we have a border of the two zones – one is so to say historical, which is by the old facade and reminds of the former house’s outlines. The other is modern, and on their joint there appears a whirlwind, funnel, whirlpool. However it does not move anywhere and is not trying to burst forth as one would expect of a whirlwind. No, the atrium is under control, it is hidden within the body of building and it can be understandable only in an interior. The small lantern for its illumination will not be visible at all from Schepkina street.

The atrium is right in the middle of the building between the two stairs and lift units and joins four office blocks of each of storeys plans of which are same. Over the ground floor where the lobby is placed, it hangs like huge glass "pipe". From the lobby opens the main prospect of this fascinating design. Authors of the project are going to apply in the atrium special dichromatic glass of a German firm SCHOTT, which color changes depending on angle of view, sunlight and background. Effect arises from a combination of low and high deflective layers – as a result visitors will see a rainbow inside the building or look from a ground floor into the huge "kaleidoscope" refracting in fantastic images everything around.

Any reconstruction with the adaptation is a complex solution balancing between ambition to keep history and opportunities of modern architecture. In this project Andrey Romanov and Ekaterina Kuznetsova managed not only to combine both, but artistically present their collision – having hidden in core of the building its main highlight – biomorphic well of glass whirlwind. 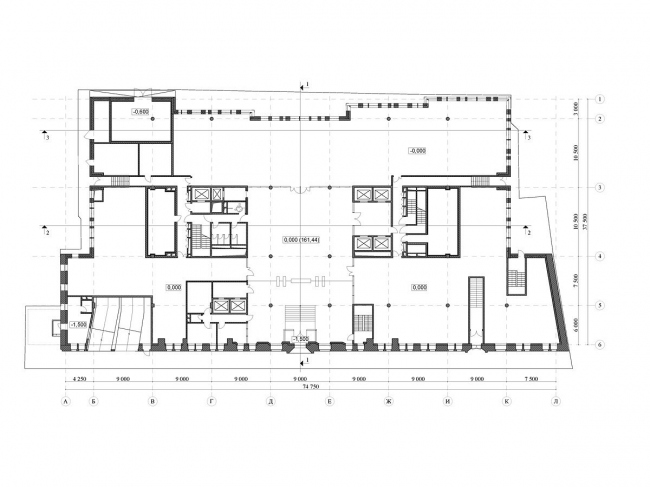