Name of the project of a village in area by Moscow “Zhemchuzhina Il’inki” [Pearl of Il’inka] is not just a metaphor. The settlement is designed alike to a shell with a “pearl” inside – here the architectural image totally accords with village's name. When people attracted by advertising will come here they will see a “real pearl in a real shell”.

When architects of A. Asadov's studio on order of “Peresvet-Invest” company started the work on contest project for the village, they got to know Zaha Hadid will take part in the contest. Yet she did not participate but that - as Alexander Asadov says – made them search a complete image, a unique idea. The village is turned into a shell with pearl inside and so called it "Zhemchuzhina Il’inaki" [Pearl of Il’inka].

Nowadays it is more common that realtor’s name is not close to architecture or too distant. But it is different with “Zhemchuzhina” of A.Asadov’s studio. Here, the whole process of project, starting with architectural interpretation of the site’s form and ending with the village's name, serves the only idea - creating microcosm enclosed into an imaginary “shell” with a pearl inside.

The image came in the very start of project work, when the architects were offered this site for developing. Outline of a shell ideally were inserted into its trapezoidal form Also it was important that the relief of site was gradually going down – in the result there appeared idea of “amphitheater” arrangement - houses in concentrical rows go down towards the public centre with park and artificial lake.

Center and the turning point of the village is the artificial lake with pearl of restaurant floating, it is covered with grid, gold-colored and semitransparent construction which sparkles in the sun. “Zhemchuzhina” becomes a lighthouse for the village, rays of light spreading from it unite the surrounding houses into the ensemble.

Semicircle of the public centre is a frame for the “pearl”. The frame consists of the park, constructions of the school and a nursery school, administration building, and separate sectional small houses. These houses are for young people that do not long for quietness but for intensive social life of the village. The houses of triangle layout and each one includes a few apartments.

Next go the rows of townhouses. They have common plans but the architects tried to maximally vary outlines of facades. Townhouses fancily curve, taking up wavy line of their roofs imitate a shell's geometry.

The other row – houses-quatrefoils, each part had a separate apartment on each storey. On the whole there are four volumes gathered around a glass lift tower in the centre - there are wooden bridges to each apartment from it. A. Asadov says, "typology is a combination of private houses and sectional towers, that is there are a few private houses here placed on each other".

The exterior outline of the village is made of the very long house – its length is about 1 km an a half. The house marks the border and protects the inner amphitheatre from the outer spontaneous development. The house curves coping surface of a shell. Its first floor has terraces for trees and flowers – here all the vacant places are used for greenery even between the upper storeys.

Image of a shell is also maintained by arrangement of roads – car routes go along perimeter of each block, limiting the territory and pedestrian paths are placed in the centre. So, cars do not bother people in the village’s “microcosm”. The scheme is modern and ecological, it was tested in the village "Barviha-club" constructed by A. Asadov’s studio. Andrey Asadov says that time “this scheme” was finely realized and it worked”. Now architects actively use the idea in their new projects – new city block to the south from Domodedovo, we have told about earlier. Ecological transport plan is suitable here too – it marks the borders and protects the inner part of the “shell”.

Village with a pearl is thoroughly staged. Like in a theatre here each building plays a role for one image. A very interesting image: it suggest the realtors a “full service set”, architecture and marketing plan. On the other side – this image is the exact implementation of the main idea of all the new villages in Moscow area – each one is a kind of shell, an effort to hide some territory from the surrounding spontaneous development and create within a comfortable, homely space for living, a pearl protected from the outer world by solid walls. 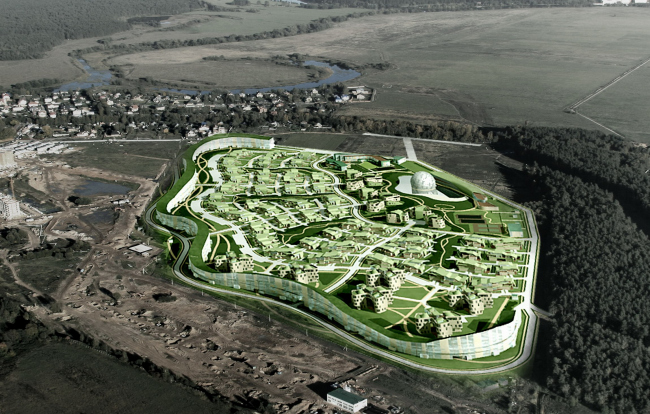 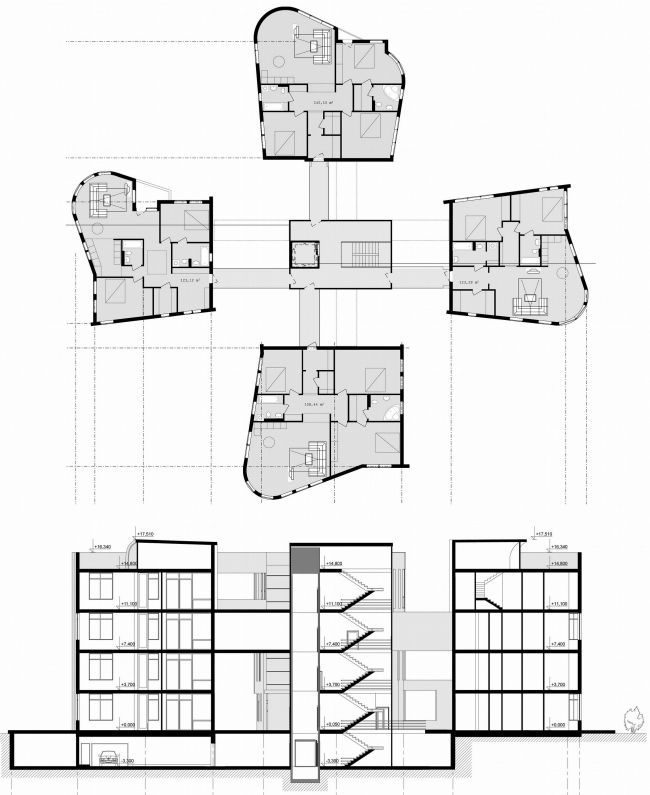