Based on the visual and landscape survey that later on became a valuable part of the concept in its own right, the architects of "Ostozhenka" Bureau proposed to keep 85% of the views of the St Simon Monastery seen from the embankment, at the same time increasing the height of the residential buildings. 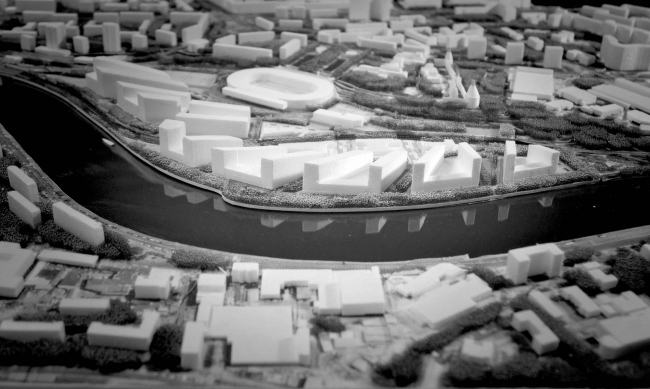 The territory in question is of quite a significant size - about 64 hectares - it stretches from south to north between the smooth bend of the Moskva River and the remains of the St Simon Monastery situated next to the "ZIL Peninsula" that is now also under reconstruction. The eery semi-industrial place keeps curious monuments of different epochs: from the Nativity of the Blessed Virgin Church dating back to the XIV century and the monastery towers of the XVII century, the most famous of which is, of course, the tour guides' favorite, the "Barrel" Tower - down to the "ZIL" Palace of Culture designed by the Vesnin brothers (yes, back in the day it was built in the place of a destroyed monastery but now it has also became an important monument of architecture, so it goes) and Shukhov oil cisterns standing closer to the river. In the late fifties, a little more to the north, a 15000-capacity football stadium was built. Now it is planned that both the stadium and the architectural monuments will be preserved and at the same time a large residential complex will be built here, one whose concept the Ostozhenka architects have been developing for a few years now. 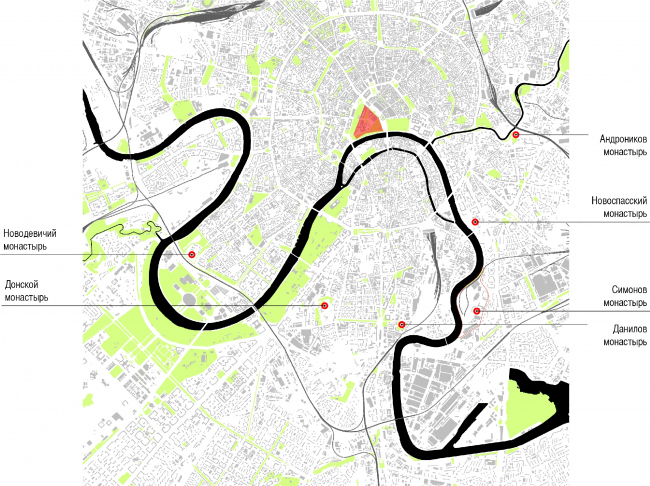 The southern half-ring of "fortress" monasteries. Concept of a multifunctional residential complex with objects of social infrastructure © Ostozhenka

The concept required a detailed survey of the surroundings. Initially, the architects came up with the relevant to our time quarters that boasted the specified whopping three hundred thousand square meters of useful floor space. However, based on the landscape and visual survey, the licensing experts of the municipal authorities required that the height of the buildings should be cut down from thirty-three to eighteen meters so that these buildings would not block the view of the monastery and, most importantly, the "Barrel" tower together with the Nativity of the Blessed Virgin Church. The "curtailed" buildings simply would not house the required amount of useful square footage. Then the architects conducted a landscape and visual survey of their own studying a dozen panoramic views of the St Simon Monastery if viewed from the Derbenevskaya Embankment and the Novospassky Bridge, and not only from the pedestrian's vantage point (the height of the horizon being 150 cm) but also from the driver's line of vision which is significantly lower (horizon 127 cm) and came forward with an alternative version: they increased the height of the buildings still more (up to 40+ meters) but what they did was break the quarterly order and position the buildings in a radial fashion, as if they were running away from the central tower in an exquisite geometrical fashion, and not evenly but smoothly bending their direction so as to provide a maximum number of views of the architectural monuments.

Indeed, the quarters blocked the view of the tower virtually from every conceivable angle. However, if lowered down to eighteen meters, even if we are to disregard the customer's square footage specifications, the complex was spreading over the ground in a single volume that, when viewed from a distance, looked a lot like a blind fence, above which the cone of the tower towered rather incongruously. Proposing to gather the volume in compact modernist rays, the authors achieved, on the one hand, the effect that the buildings now obscure not more than 15% of the monument views. On the other hand, when viewed from a moving car, there will appear the "picket fence effect": the tower will be seen all the time, as the architects claim. For them, this survey has long since become a part of the project in its own right. The specialists of the licensing board recognized that this solution wad a successful one. 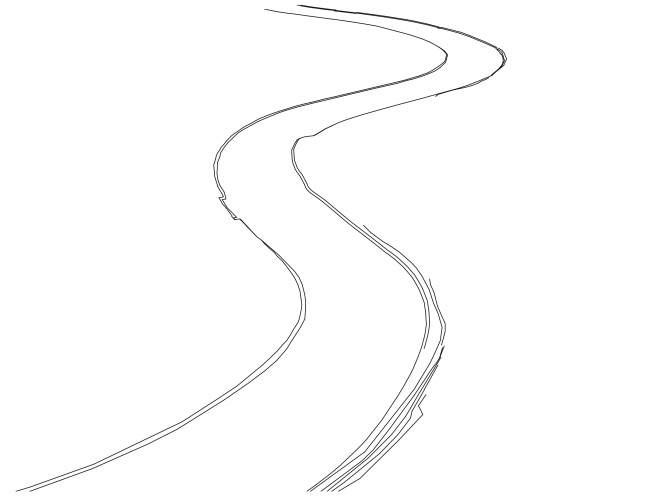 Prerequisites of the design solution © Ostozhenka Visual analysis of the final version of increased height. Concept of a multifunctional residential complex with objects of social infrastructure © Ostozhenka In this case, the "fan" of slabs is the key revolutionary idea. All the "power lines" run up to the tower, as if the complex were paying homage to the monuments of architecture. Yes, it used to turn away from them, block them, even "destroy" them but now it has changed its mind and pays respect to the monuments. As such, the very idea of placing the houses in a radial fashion, or even at a ninety-degree angle to the street is not entirely groundbreaking, it is one of the techniques of the classic modernism, great for increasing the airing and insolation properties. However, what is interesting in this particular case is the fact that the essentially modernist plan is used specifically to accentuate the ancient monuments. It would be interesting to develop this idea in other Moscow projects, particularly the large ones, to "crumple" the city's folds and crinkles around its historical monuments - and maybe the city would become more refined and civilized. Generally, this is amazing how Ostozhenka can endow gigantic volumes with delicate feelings, as if "teaching elephants how to dance". And - what else can you do if the elephants are the only thing that this city ever gets.

Still, the architects did not entirely neglect the now-popular theme of the quarters - because the today's house simply must have a private courtyard of its own open only to its tenants - the "radiant" houses joined together to form large "horseshoes" opening up to the river in Ostozhenka's trademark arches, and to the tower - with the wings of double-L-shaped plans. These plans are used by the eight residential quarters standing along the river, from four to twelve floors. Together, they will house 2650 apartments of "business", "business+" and "premium" class. The total floor space of the project is 251 500 м2; according to estimates, it will be capable of housing a little under 6000 people. All the "quarter" buildings are raised on stylobates that include the shopping zones, social infrastructure, and the parking garages. The stylobates support the courtyards, private, but still not entirely closed: they command a broad view of the tower and, with a narrower perspective, toward the river.

Most of the apartments are double-sided, with large areas of glazing, which again enhances their connection to the surrounding panoramas. The turning of the radial buildings, besides the kind mentioned above, inside out, provides for the visitors both the views of the river and the St Simon Monastery. The architects of Ostozhenka also came up with a traffic diagram of their own, more convenient than the one that had been initially designed for this territory. Presently, the traffic area ends just short of the territory of the St Simon Monastery, making an abrupt turn away from the river in the direction of the Velozavodskaya Street; meanwhile, according to the municipal development plans, the carriage way of the Simonovskaya Embankment must be continued, cutting the new area lengthwise in two. This is just the right solution for Moscow that is choking on the exhaust fumes from its endless traffic jams. The architects were able to show, however, that, by straightening its line just a little bit, they could place all the residential houses by the river, without separating them in two groups with a busy highway. This last solution will ensure that it will only be the monastery and the stadium that will be left behind the highway, while the entire residential complex with its massive infrastructure will adjoin the pedestrian infrastructure - which will significantly improve the quality of life of the people who will live here and the value of its apartments.

Ostozhenka's partner - the British company Gillespies that specializes specifically in landscape design - made a research of this area and developed a detailed plan of improvement on every level, from the tenants-only courtyards to the embankment promenade. As for the above-mentioned highway, Gillespies proposed to throw over it green bridges with bicycle trails. They also came up with three main walking routes: the stadium and the quay are linked by a descending "sport esplanade", from the monastery one can get here by a "historical route" (the surviving Shukhov cisterns will be turned into art objects). Meanwhile, between them meander the trails of the municipal park, the pedestrian trails uniting the entire area. There will be even a swimming pool. Volume and planning organization of the residential quarter. Concept of a multifunctional residential complex with objects of social infrastructure © Ostozhenka

Naturally, some might wonder: well, what about the facades? We have not yet heard a single word of them. The architects deliberately concentrated on the volume and planning solutions so as to showcase as accurately as possible the principle of handling such territories that they have come up with. "A facade is a very important category; recently, however, it has been taking more and more independence, and, just like Major Kovalev's nose in the famous novel by Gogol, it seems to exist and function quite independently now. What we ultimately got was buildings of a very complex shape, with numerous angles, facets, caves and protrusions, and we, of course, came up with a version of outward decoration but it isn't by any means obligatory. Maybe in some twenty or thirty years the facades will become changeable like the clothes that we wear" - says the leader of "Ostozhenka" Alexander Skokan.

The nucleus of this whole project is not its plastics but a chain of carefully elaborated ideas of improving a complex territory that required transformation and preservation at the same time. As is often the case in the situation when the authors find themselves between the devil and the deep blue sea of the customer's square footage requirements and the municipal restrictions, the meanings got shifted here: the landscape and visual analysis, seemingly something secondary and peripheral, came to play the main part and became the very essence of this project; not only did it entail extra work but also changed the perception of the entire end result. And it is all the more remarkable that the outlines of the buildings took on not the chaotic "medieval" tooth-like quality but came out pretty whole and clear, forming together a clear and concise idea.

The fan of the "rays" - viewing angles - looks like the sun, the way Mayakovsky would draw it on his posters. Well, what can you say here? The masters of avant-garde also gave to the world a lot of interesting ideas, some of them people started appreciating but recently, and some maybe will be appreciated by our descendants. A survey is an important thing to do; sooner or later down the line it will have its effect.
Text by: Anna Starostina
Translated by Anton Mizonov 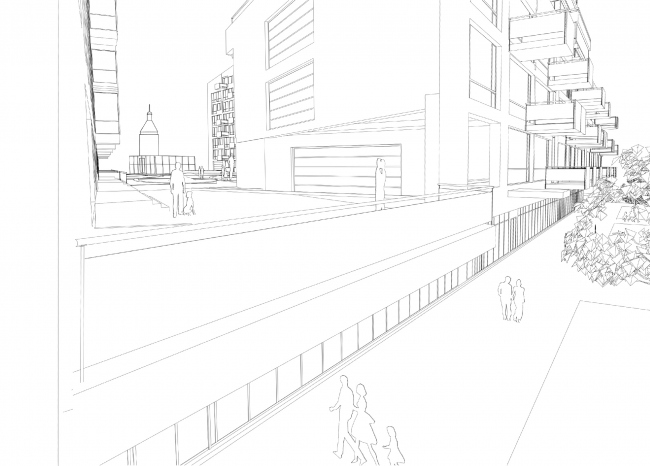 Volume and planning organization of the residential quarter. Concept of a multifunctional residential complex with objects of social infrastructure © Ostozhenka Master plan of the landscape design. Concept of a multifunctional residential complex with objects of social infrastructure © Ostozhenka Options of the designed highway. Concept of a multifunctional residential complex with objects of social infrastructure © Ostozhenka