Forum within a Forum 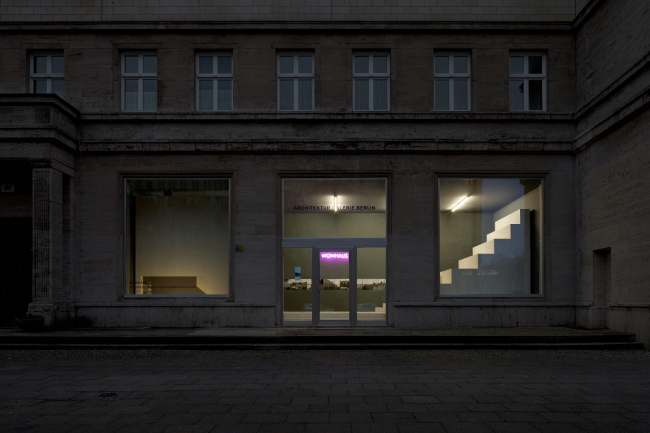 At a first glance, today's Berlin is almost the complete antithesis of Moscow - city that never hurries anywhere, with a highly developed infrastructure, full of public territories and green areas. From a Berliner's point of view, Moscow is chaotic and rather conductive of a conflict than a dialogue; besides, the order of introducing the modern architecture into the historical part of the city more often than not fails any logic tests. In this pair, Berlin is synonymous of comfort and communication, while Moscow, at least, until recently, was synonymous of chaos and alienation. It was all about urban disorientation and absence of systematic work on revising the public territories that the city inherited from the soviet era. Only at a first glance, though. Today's Moscow, like no other megalopolis, is all about renovation and creating comfortable territories for communication.

Still in May, the main architect of Moscow Sergey Kuznetsov brought to Berlin architectural forum "Aedes" the exhibition "New Moscow" that featured all the main contest projects on reorganizing Moscow's territories over recent years.

Now the story of revising and updating Moscow's public territories is joined by Berlin Architectural gallery lead by Ulrich Mueller who, incidentally, plans to widen the geographic focus of the gallery's activity in the direction of Russia.

Berlin saw Dmitry Likin and Oleg Shapiro, partners of the architectural bureau Wowhaus, and, probably, one of the main transformers of Moscow's public territories, bring to the exhibition not a standard set of boards and models but an amphitheater. Or, rather, an idea of one - the structure itself was made on the spot, only a few days before the exhibition. Executed from high-quality plywood, the amphitheater took up almost the entire space of the gallery serving both as an exhibit and as a functional object - comfortably sitting on the rows of its seats, the visitors can be further immersed into the creative work of the bureau turning to the video screen that displays the main projects done by Wowhaus, or simply have a great time enjoying a glass of wine together. 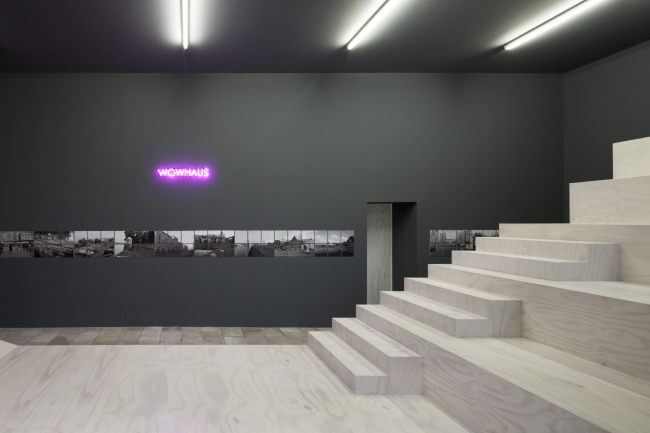 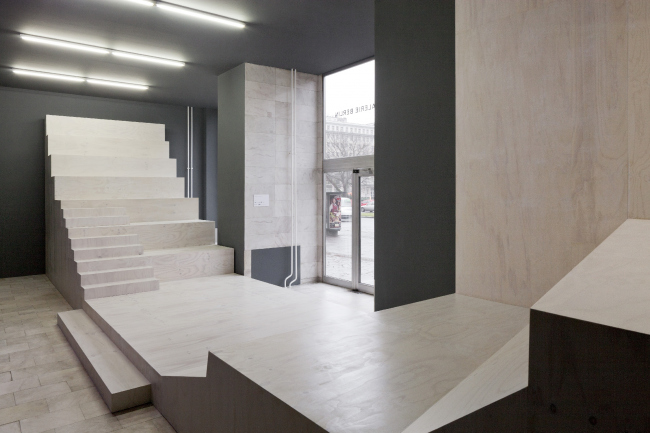 The reason for the architects turning to the genre of amphitheater is pretty obvious. An amphitheater is the most important and the most easily discernible archetype of a public territory, a space for communication. The idea of creating a statement of an object also as best as possible fits the traditions of the gallery: Herr Mueller has always preferred conceptual solutions to the rank-and-file sets of exhibits. Besides, these solutions are oftentimes created specifically for this gallery and are in fact installation objects that are meant to start the visitor thinking, in one way or another, about the meaning of architecture, and immerse him or her into the atmosphere of dialogue and exchange of creative ideas.

The amphitheater Wowhaus is not just tribute to history but a peculiar story of the works by the bureau itself. Amphitheater is the architectural solution of Strelka's yard, and of the summer open-air movie theaters (in Gorky and Feelee parks). Besides, according to the architects' idea, the quaint buildup of the amphitheater's steps that is on the side opposite to the spectators' rows will be the "library of forms" inspired by the projects done by the bureau.

The space between the two constructions of the amphitheater is designed as the entrance landing. On getting here from the street, the first thing that catches the visitor's eye is a series of black-and-white photos of Moscow territories. These are the very land plots where Wowhaus projects were designed and/or implemented: Green Theater, Tverskaya Square, Revolution Square, Olive Beach (Gorky Park), Krymskaya Embankment, and Strelka Institute. Thus the task-setting is made: revising the neglected or under-developed territories. As for the space of the forum/amphitheater, it is also in fact one of the possible solutions of this task, and, actually, forum is meant to communicate and solve such tasks. 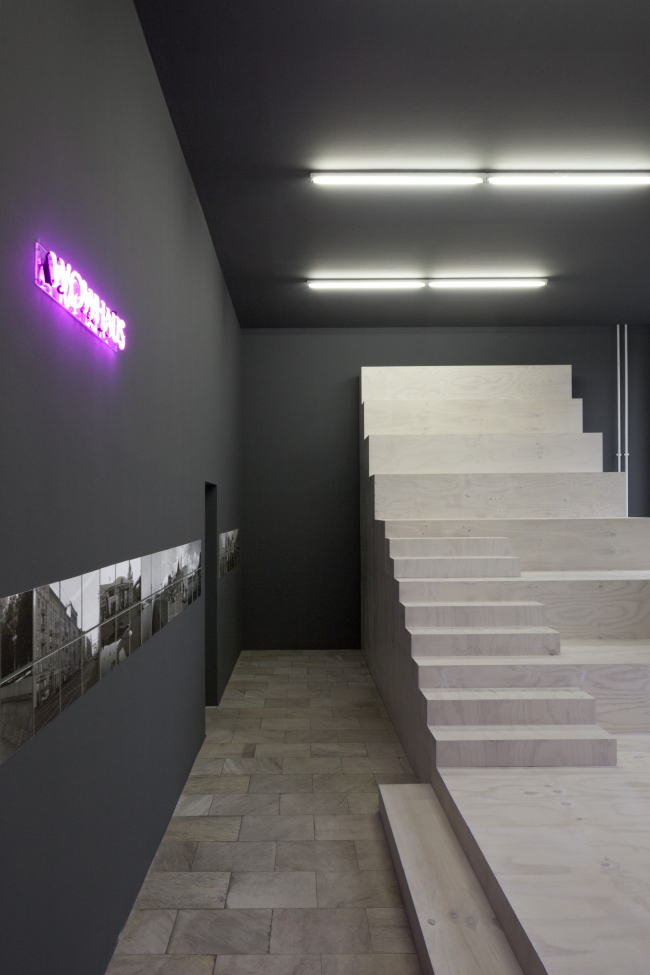 Moscow amphitheater of Wowhaus, a forum inscribed into the space of Berlin Architectural Forum, reconciles the two seemingly different nation’s capitals. Set in such a way, the theme finds its continuation in a series of specially organized events: public lectures, screenings of Russian movies, and informal meetings of the architects.

At the opening ceremony, the inauguration speech was delivered by the German culture expert and writer Michael Schindhelm known, among other things, as a curator of the survey of public territories at Strelka. Herr Schindhelm presented today's Moscow to the Berlin audience as a sum total of some certain contradictions: openness to multi-nationality and absence of adequate dialogue between cultures, vast green territories within the city limits and lack of their organization. At the same time, Moscow was presented as a territory with a huge potential for modern changes. And one of the main propagators of these changes today are definitely Wowhaus architects - says Michael Schindhelm.

One of the main projects implemented by Wowhaus is the reorganization of the Krymskaya Embankment. Once a bleak way down the pedestrian sidewalk, for example, from the Central House of Artists to Red October complex has now been remodeled to become one of Moscow's most beautiful promenades. Interesting is the fact that the architects were in fact able to make an architectural path from one of their projects to another: from the Gorky Park (Olive Beach and the winter skating rink) to the amphitheater in the yard of Strelka. Casting one's eye over the exhibition from the happy Berlin, it becomes obvious that Moscow is also becomes a better city to live in, while the transformed downtown territories are also capable of creating the ideal environment for the exchange of ideas and communication. 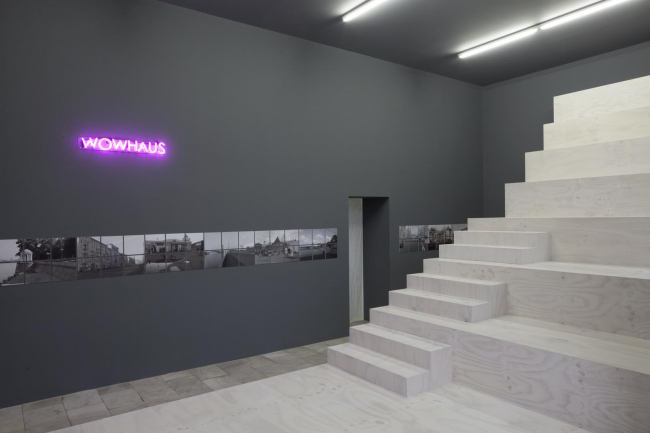