A martian reservation in Pecherskie Peski

The concept of a mixed-use centre “Ostrov” in Nizhny Novgorod completely answers its typology – it really has a lot of various purposes. Exteriorly the complex looks like a giant liner “ingrown” into the ground of peninsular in front of the Pechersky Monastery

Integrated territory development is the term that has been very popular lately. The concepts of sites development – their space is equal to a small town – sometimes suggest incredible combinations of functions and ways of solving infrastructure and transport issues. Well, not all of them will ever come to stage of initial permit documentation, but this does not mean that such projects are not worth thorough consideration. “This pied collection”* is not an attempt to dip into the future, but create it.

Among such works is the project of “Ostrov”, a mixed-use centre in NizhnyNovgorod designed by PAM of Yuri Vissarionov. It will be built on the peninsular Pecherskie peski, which nowadays is suffering both from spring flood of the Volga and lack of any kind of infrastructure.

The 61 ha site is stretched along between the Volga and north-east bank of Grebnoy canal. Though geographically this is the very centre of Nizhny Novgorod (Nizhegorodsky rayon), and on the opposite bank of the canal there is the famous Pechersky Monastery, the peninsular have never been properly concerned about. In fact, this stripe of dry land has been given to those who love shashlyki and beach parties. There are hardly three summer cafes on Pecherskie peski today and such common feature of civilization as a toilet is still a dream for the peninsular.

At that, it is clear the advantageous location in combination with independence of the area would surely attract the potential investors. In Nizhny Novgorod the discussions over the development on Pecherskie peski has been held for a long time now, and during the debates the authorities, developers and architects have come to the single opinion that there must be a multifunctional complex on the peninsular, which would be able to turn it into a place of 24-hour activity. This is why the concept of the territory development by Yuri Vissarionov is so rich with typologies of the constructed objects. The architect wants to include there a retail and entertainment centre, sports centre, aqua park, congress-hall, medical centre, three and four star hotels, camping area and areas of outdoor activities.

The only limitation the architects had to put up with – requirements to the height of the projected object. As there is Pechersky Monastery in front of the western part of the peninsular, the new buildings cannot be higher than 16 meters. This requirement has been the initial for the composition idea of the complex. The general layout resembles a necklace of different beads, which are gradually growing in their sizes as they are further and further from the western part of the peninsular. The chain of biomorph objects is closed by the two cone-shaped hotel towers.

This is fantasy and futurist architecture. In one of the variants the towers are covered with flexible and thin metal net, their form is of parabolic outline with huge “pin-tuck” on top makes think that it has been “sculptured”, not of clay, but of some modern plastic. To the west from the towers is stretched Martian landscape of oval domes, to the east there are orderly cells of a student quarter.

All the buildings are built like “hanging houses” and will have reliable waterproof foundations and this guarantees visitors of the centre that they will have fine time round the year. The objects are connected by roofed glassed passages – a kind of decks that make the giant complex to look like an intercontinental liner, which is not afraid of any windstorms. The marine theme is maintained on ideological level: a yacht club with a dock will be included into “Ostrov” (this will make it possible to get to Pecherskie peski by water), also a Multimedia centre of traveling around the globe and Oceanarium.

Traveling and traveling on water is the main idea of the island architecture. Groups of floating docks (hotels, restaurants, adventure playgrounds, media-centres, offshoots of oceanarium and aqua parks) become an essential part of the complex that is sailing away from time to time and is coming back again to the island-ship. The independent elements, located close to the place where the Volga and the Oka join, traveling like a circus reach almost any place in central part, and any part of the city, completing the urban centre with modern functions. In winter these not large boats-islands get together by a dock creating a single sailing object.

Along the bank of Grebnoy canal there will be a boulevard for strolling, and before it there will be the main transit rout, separated from the complex by the “buffer” of car parkings. Beside the ground and water transport, a hanging rope-way will connect the complex with the “large land”. 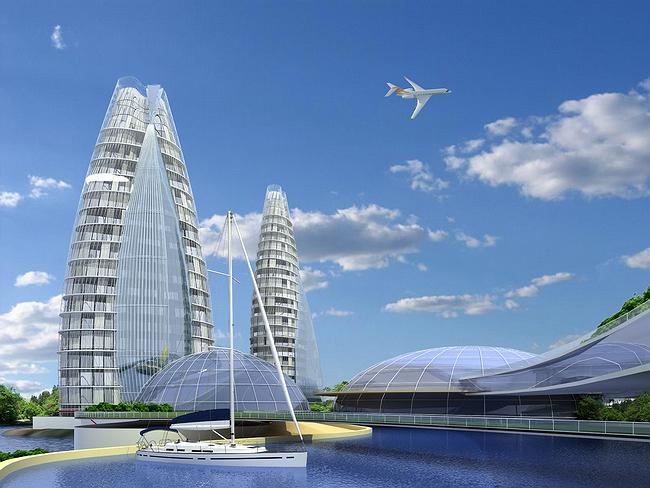 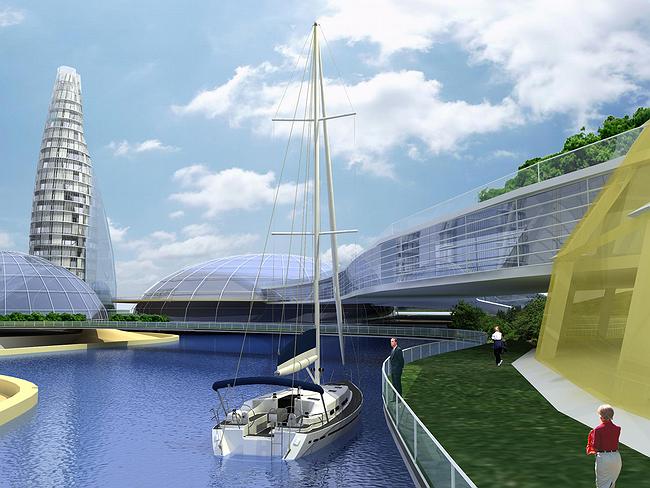 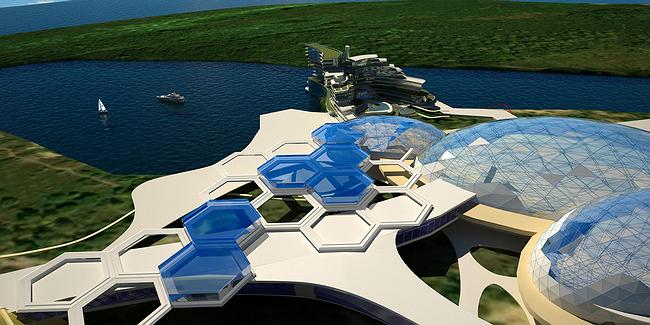 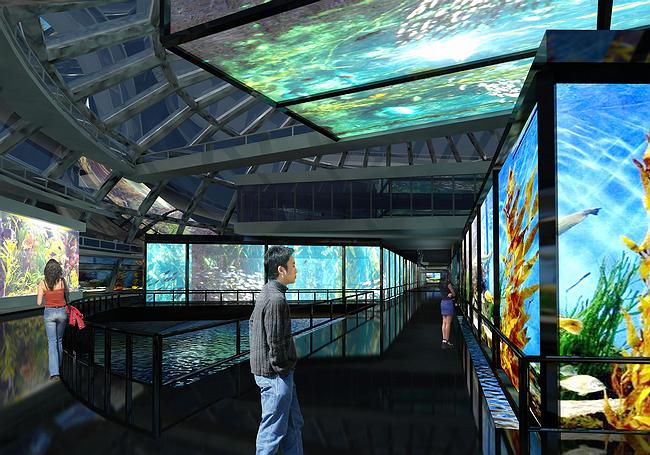 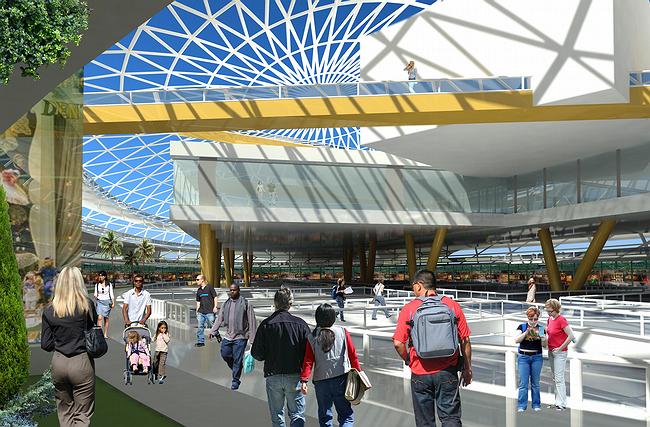 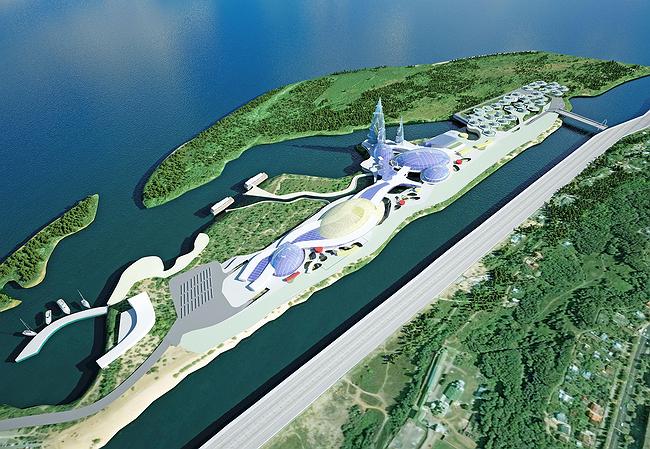 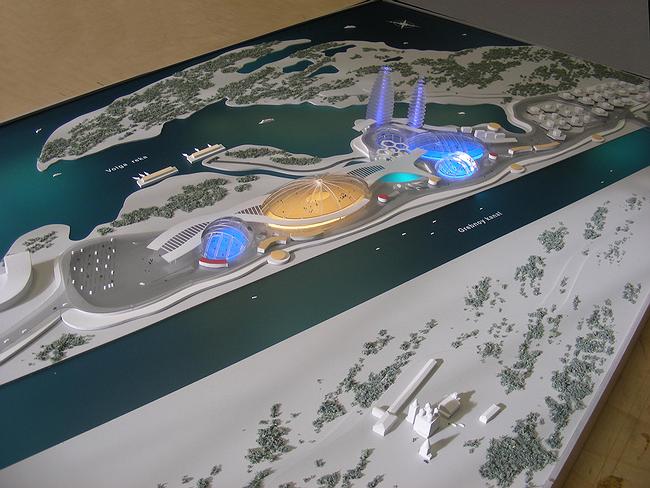 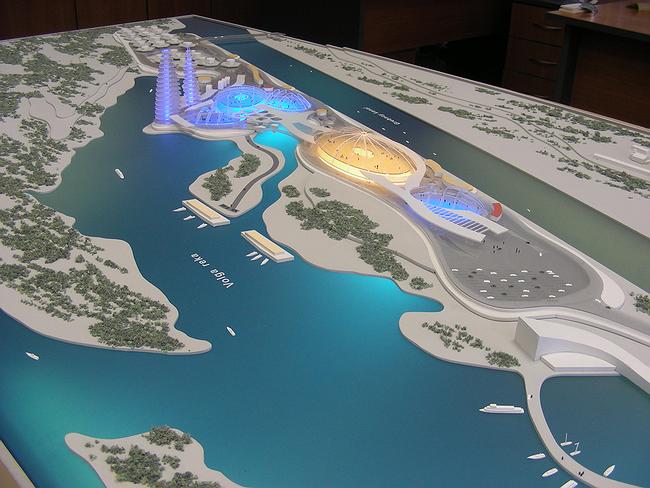 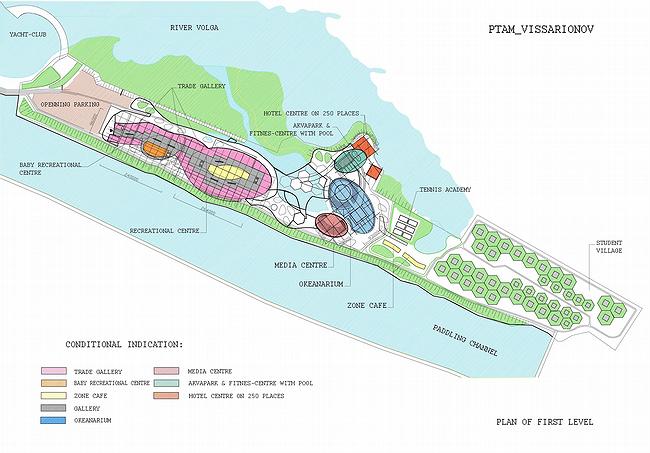