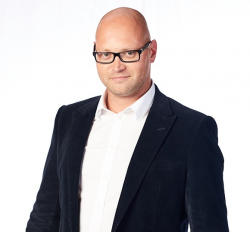 Vladimir Kovalev is the founder and CEO of “OLIMPROJECT” Group (2006). Vladimir takes a direct part in all the company’s project at the “architectural concept” stage. He is the author of the projects:

The housing project at the Mikhailova Street skillfully uses the benefits of its surroundings to the advantage of its future residents, exploring numerous fashionable trends of today: the façades are meticulously elaborate, and the public spaces are well thought out from the standpoint of both city people and the residents of the complex.

Alla Pavlikova. ​Town on the Roof

A multifunctional complex with apartments, an office center, a shopping gallery, a multilevel parking garage, and a new city square is being built on the basis of the former body shop of the ZIL plant, the largest building of the former automobile plant.

Alla Pavlikova. ​Vladimir Kovalev: “What matters in architecture is the factor of responsibility”

An interview with the founder and president of “Olimpproekt” Vladimir Kovalev about his company being a “smart machine”, its main asset a team of like-minded people.