Roman Leonidov: "Half-timbering technology is, in my view, the upcoming trend of today".

A conversation about NEWOOD - the company that Roman Leonidov created two years ago for working with standard houses that are built with the use of the "half-timbering" technology. Archi.ru:
- When did NEWOOD project appear and what is it all about?

Roman Leonidov:
- The brand NEWOOD appeared but two years ago but over this comparatively short time it has gained a fair amount of recognition. It all started with us doing a few projects using the half-timbering technology that has a lot of advantages and benefits, and attempted to reconstruct the technology that was very popular in Moscow still in the late XIX century, when in the two-story construction, the second wooden floor was in fact of the framework type, with bearing corner columns. At the same time, the filling can be absolutely of any kind. Essentially, it is the same good old half-timbering technology, only some slight different version of it, different from the standard French or German samples.

At some moment, we decided to use this knowledge, and, based on such technology, made a project of a guest house belonging to a Moscow manor. It became the prototype of a whole series of residential houses, a series that we named "Scandinavia". Besides, this project was to play the key part of the seed from which the company has grown: it was at that point that we had an idea to create a special studio that would specialize in timber construction. The idea was really simple: the very material gives here, in the Russian latitudes, a lot more creative freedom to the architect. 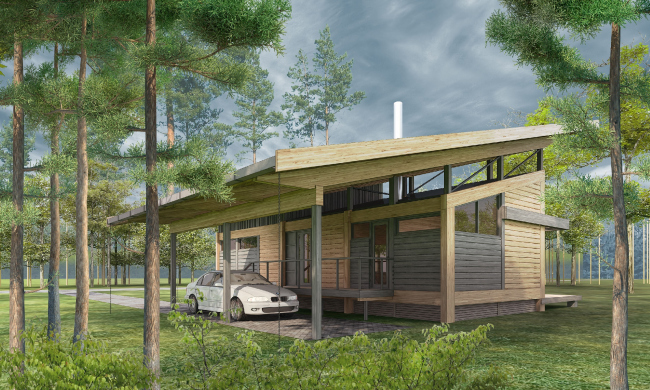 - And how is the work of your studios wired? What are your priorities?

- For me, the division of our activity among the three independent companies - "Shabolovka" that mostly does the interior design projects, NEWOOD, and "Roman Leonidov Architectural Bureau" is nothing more but a business maneuver. Having satisfied my ego with the creation of a studio named after myself, I realized that by doing so I was limiting the number of possible customers and the creative growth of my employees. The thing is that when the customer comes to "Roman Leonidov Architectural Bureau", they, of course, want to work with Roman Leonidov and nobody else. Having "Shabolovka" and NEWOOD that are not tied to any specific name, it is a lot easier to help your young architects to grow and excel. And I am sure that it us the fresh blood that helps the company grow and develop. Besides, shifting part of the responsibility to my employees, I get a little bit more free time as an architect. 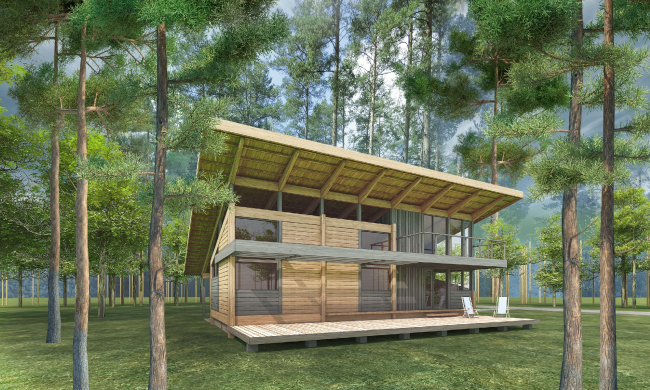 Yet another plus is the clear-cut division of my companies according to their types of activity. To me, it is perfectly obvious that designing the interiors and designing buildings simply cannot be done by one and the same person: these are two different professions. However, to keep my company afloat, I think it right to cover all the spheres: there are times when there is more demand for the interiors, there are times when type houses are in demand, and sometimes its the unique architecture that's on top. Thus, we get a certain share of financial security and stability. 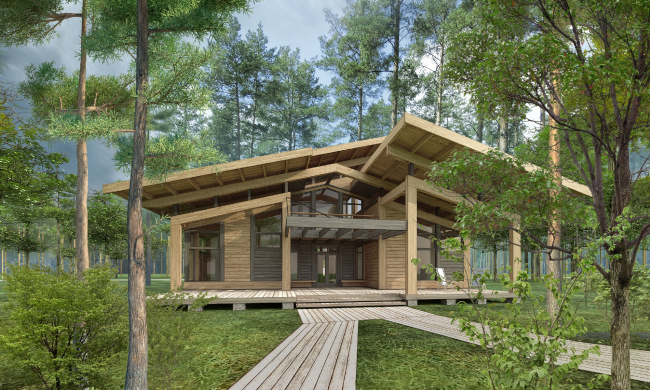 - Why did you decide to specialize in the laminated veneer lumber, refraining from using, for example, the regularized round timber and other technologies of working with wood? What are the advantages of the half-timbering technology before the traditional one?

- Initially, we made opted for LVL because it shrinks a lot less than the regularized round timber. As the main benefit of this, the main problem of any wooden house that scared the customers off is solved once and for all. The crucial factor in the buying decision is now the consumer properties of the house in question. Besides, an LVL house does not need any extra warming or decorating: the wooden construction perform both the bearing and the decorative functions. This material gives more plastic advantages and opens up new opportunities of working with the shape.

- To what degree do you "fine-tune" each standard project adapting it to the specific terrain and the customer's requirements? Perhaps, after this, the project stops being "standard"?

- Of course, standardized projects can be fine-tuned and readjusted: we always consider our customer's requirements but, yes, it all depends on the degree of readjustment. If it is necessary to move the door a bit in the partition or slightly adjust the parameters of the premises, then, yes, we can consider this house as built on a standardized project. If we are asked to make considerable changes, as a rule, we offer the customer to make an individual project that will exactly meet his needs and expectations.

There was a case, however, when in the end version of the standardized project it was planned to build a single-story house with a loft over a double-height living room. Our customer asked us to substitute the loft with a second floor, placing the bedroom there. I am not sure if the project stopped being standardized after that. Probably not. It's just that we got two versions within one series for our customers to choose from. 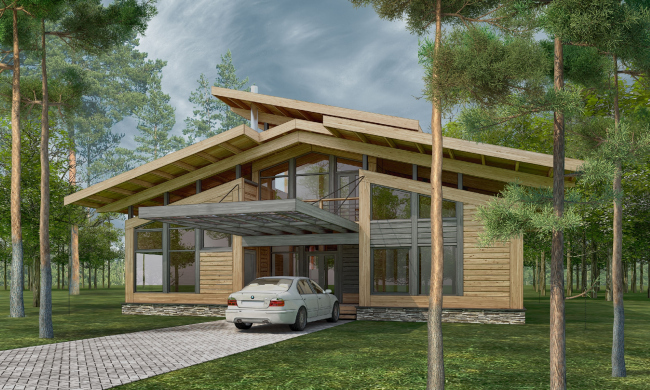 - Which individual projects stand a chance of living on as "standard" ones, and which don't? Were there any cases of such transformation in your career?

- Even if there are such cases, they are few and far between. Making a custom-designed project is the same as sewing a custom-designed suit for your customer. Offering not just similar but exactly the same project to another person would be a difficult thing to do. A house is always the owner's portrait. And here it is always more simple to work with your average type project designed for an average family. The first thing that comes to mind is the guest house that I already mentioned - it was designed as an individual one but ultimately it became the standard type.

- How quickly is the half-timbering house built? And - still more interesting - how much more or less expensive is it in comparison to the concrete one? What is the price ratio if you compare not the specific projects but technologies per se?

- The cost of such houses is almost the same as the LVL. And if we are to compare these houses to the stone ones, then the half-timbering house will turn out about 10–15% less expensive - in view of the fact that stone construction requires more operations: stucco job, paint job, and so on. In the case of the wooden wall, these stages can be simply left out. As far as the implementation terms are concerned, full assembly, regardless of the degree of complexity of the project, takes up no more than two or three months. - In which market segment do you think NEWOOD operates? Do you plan to expand your range into the cheap segment or, the other way around, to focus on the luxury houses?

The company NEWOOD was devised as an independent dedicated brand. However, this year I started to think about developing it and broadening its range of activity. It became clear to me that using but one technology narrows the possibilities of developing both your architecture and your business. This is why we decide to focus not only on manufacturing and selling ready-made houses according to the rehearsed plan but also upon designing for our large-scale partners - large companies that build with various technologies: from the traditional logs to the LVL and half-timbering. I personally hope that it will be not the end consumers but the architectural companies that will order our projects - this is my primary objective.

Half-timbering is, in my view, the upcoming trend of today. I am convinced that in a couple of decades 80% of Russia's housing stock will be of the half-timbering kind. Today, this phenomenon can be observed in the USA, Finland, Canada, Denmark, and Norway... I am counting on the fact that in the near future will be able to design a series of even more cost-efficient houses. As a result, we will develop not only expensive projects but also quite affordable ones that at the same time will not look cheap at all. It is very important for me to have an opportunity to let my customers know that the wooden house can be different: modern, cozy, practical, expensive, affordable - of any kind, really. - Your frameworks are pretty much the same in all of your projects. And how do you work with the decoration materials?

- If we are to speak about the half-timbering technology, then there are no limits here all: you can use any decoration materials you could possibly think of. As far as regularized round timber is concerned, then very few options are available - this is the peculiarity of the material. When you use the LVL, there are fewer restrictions, and they mostly have to do with the two-story houses where the pressure on the foundation is greater, and, consequently, the shrinking or the contracting of the material is greater. At the end of the day, it all comes down to the creativity and professionalism of the architect. The framework of the buildings allows for using either wood or stone walls, fiber-cement panels or tiles imitating bricks or stones. - Share with us, please, about the already implemented projects and their series. Which of them would you showcase as your "model" projects?

- First of all, this is the good old "Scandinavia" - the wooden LVL house. This house is what it all started with, and, today, this is the project that gets implemented most often and this is the project that is in great demand. I think that the secret of its success is the fact that visually this house does not look "standard" at all, it keeps a special feel of a quiet modern country house on the bank of a creek. There are no obvious technological advantages about it, except for the fact that if you have a certain bearing framework, you have a really wide room for maneuver when it comes to glazing. - Do you use NEWOOD's best architectonic practices in the projects done by "Roman Leonidov Architectural Bureau"?

- Of course, we do! All the three of my companies are inextricably intertwined. However, it would be more appropriate to say that we actively use the experience of the Bureau in the work of NEWOOD Company because in the work on individual projects you have a lot more room for experiment. NEWOOD is more conservative in the sense because we always have to think how to make the project technology-friendly. In the work of our architectural studio, we use wood and timber wherever possible - if only our customer is not vocally against it. Just by going through the portfolio of our bureau, one can see that about half of our houses are built with timber that can also be used for the long span structures from glued wood and as the main decorative material as well.
Text by: Roman Leonidov, Alla Pavlikova
Translated by Anton Mizonov 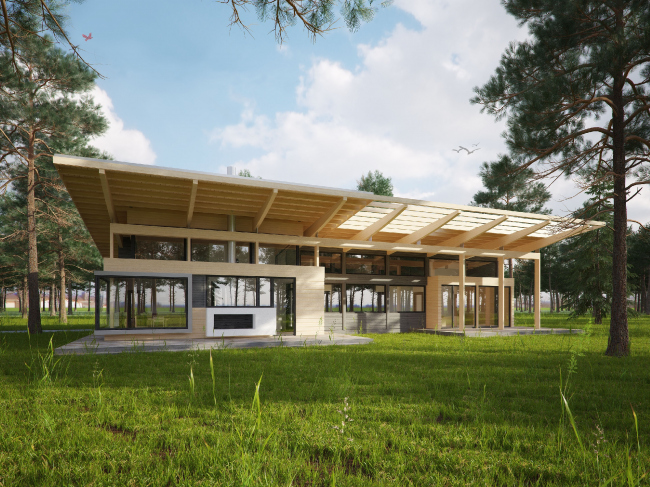 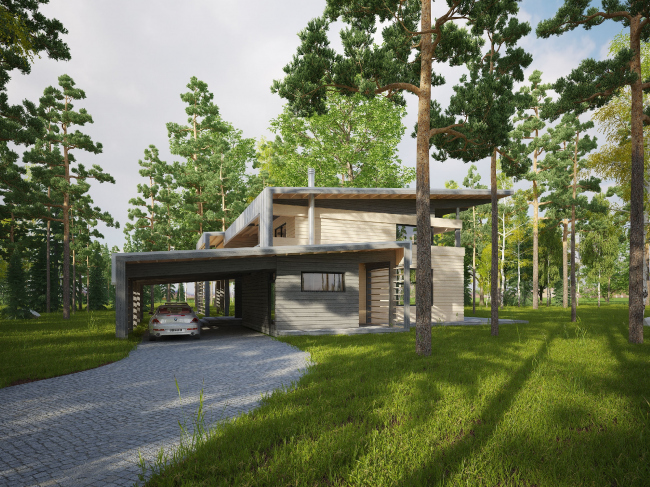