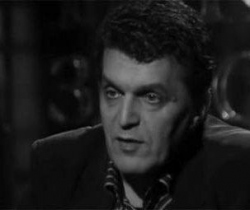 David Sarkisyan, a former physiologist and film director who became famous as the director of the Shchusev State Museum of Architecture here and for his campaigns to preserve architectural monuments against rampant post-Soviet development, died on Jan. 7 in Munich, where he had been hospitalized. He was 62.

The cause was lymphoma, said Joseph Backstein, the commissioner of the Moscow Biennale of Contemporary Art and a friend of Mr. Sarkisyan.

Under Mr. Sarkisyan the museum, in a prerevolutionary compound around the corner from the Kremlin, became a center of efforts to halt the destruction of everything from centuries-old mansions to modernist masterpieces and even the Central House of Artists, constructed under Leonid Brezhnev in the late Soviet era, a period that has few architectural defenders.

Mr. Sarkisyan, who was appointed the museum's director in 2000, warned of a "cultural catastrophe," saying that Moscow was losing its face and character. He was highly critical of Mayor Yuri Luzhkov and his wife, Yelena Baturina, a billionaire real estate magnate.

His battles were hard fought but often futile. Thousands of signatures collected by the museum and vocal protests were not enough to save Voentorg, an early-20th-century department store located directly across the street from the museum's main building. It was replaced by a new building that many regarded as a poor imitation of the old structure.

Moscow developers and city officials often argue that old or poorly maintained buildings are too damaged or too costly to save. Mr. Sarkisyan had proof in the courtyard of his museum of how such buildings could be put to worthy use.

The museum was short of money to restore one of its wings, so Mr. Sarkisyan turned it into a conceptual exhibition space called the Ruins. The uncovered brick walls and crumbling floors and ceilings of the unheated space effectively became part of each show.

Hundreds of Moscow architects and cultural figures attended his funeral in the museum's halls on Friday. Funeral organizers said city officials blocked plans to bury Mr. Sarkisyan, who was born in Yerevan, Armenia, at the Armenian cemetery in central Moscow. He was buried at a cemetery on the edge of the city.

The work of the museum became Mr. Sarkisyan's passion and the last of what he called his "four lives."

David Sarkisyan was born on Sept. 23, 1947, and had careers as a physiologist; as a pharmacologist, who helped develop a drug for treating Alzheimer's disease; and as a film and television director. He lived for a time in France, where he walked with the actress Jeanne Moreau on the red carpet at the 1991 Cannes Film Festival. Mr. Sarkisyan was assistant director on the film "Anna Karamazoff," which was in competition in 1991 and starred Ms. Moreau.

He is survived by a sister, Osanna, of Yerevan.

Mr. Sarkisyan, who could speak eruditely and passionately on virtually any topic, fielded an endless stream of visitors in his museum office, which, packed from floor to ceiling with books, art, photos, souvenirs, sculptures and toys, was regarded by artists and critics as a work of art in itself.

Grigory Revzin, architecture critic for the Moscow newspaper Kommersant, wrote last week that the office was a magnet for international celebrities.

"And all of these foreigners," he said, "told each other that there are several landmarks in Moscow: the Kremlin, the Mausoleum, St. Basil's Cathedral and David Sarkisyan's office."