Sergey Chernyshev: Architect of the New Moscow, by Ivan Lykoshin and Irina Cheredina.Reviewed by Craig Whitaker 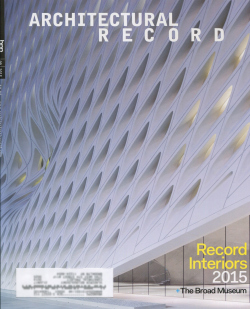 It is always fun to begin a book, decide after 10 or 11 pages that it is a real clunker, and then while lumbering forward discover something truly wonderful. Such was my experience with Sergey Chernyshev: Architect of The New Moscow, by Ivan Lykoshin and Irina Cheredina.

It is always fun to begin a book, decide after 10 or 11 pages that it is a real clunker, and then while lumbering forward discover something truly wonderful. Such was my experience with Sergey Chernyshev: Architect of The New Moscow, by Ivan Lykoshin and Irina Cheredina. The left-hand column on every page is in Russian, while the English translation is in the right column and is rocky at best. There are also too many photographs of Chernyshev, his family, and the piano he gave his wife, as well as certificates attesting to his employment. Dozens of names appear once, never to show up again. But the book’s discussion of the architect’s masterful plan for Moscow more than makes up for these difficulties.

Chernyshev, born in 1881, was an accomplished architect who lived through two world wars, a civil war, and radical changes in Russian political philosophy. He directed reconstruction efforts in cities like Kiev and Leningrad after World War II, but is best remembered for overseeing the layout of the Moscow General Plan of 1935. The plan itself is illustrated on just one page; since the book is only 8.5-by-9 inches, you may need to use a magnifying glass. It is well worth the effort when you do. My first thought was how much joy musicologists must get from looking at an original score by Mozart.

Chernyshev began with a nearly blank canvas. In the 1930s, Moscow’s iconic core - the spires, domes, and walls of the Kremlin - was surrounded for the most part by wooden houses, horse-drawn carts, and former serfs digging in the dirt with picks and shovels. Le Corbusier on a visit thought the city should be torn down in its entirety. He was right, but then we remember he also wanted to tear down all of central Paris.

The Kremlin is at the center of Chernyshev’s plan - as all czars would have directed it to be - surrounded by a series of ring roads. "Ring roads", however, is an imprecise term. These are not the perfect circles one finds at Del Webb’s Sun City, Arizona, or the grand plan of Karlsruhe, Germany, or the curves of John Nash’s Regent Street in London. They bend toward parks, pass through parks, and cross the Moskva River, only to cross it again. Chernyshev also considered water transport, the railroads, and a subway system. They all are keys to enjoying the plan. One must follow them through the city because only by traveling over time does the richness and variety of the plan reveal itself. I kept going back, tracing a new route each time with my finger.

The plan is also studded with a dozen large wedges of park, like pieces of fruit in a giant torte, each one different. Some meander along the river, others seem to be perfect venues for large gatherings - places to celebrate an historic victory. I intend to put the book on my shelf next to Hegemann and Peets’s Civic Art and Camillo Sitte’s City Planning According to Artistic Principles, since each volume shows that memorable places are as much a product of the plans undergirding the buildings as the buildings themselves.

The Moscow General Plan makes the reader wish Lykoshin and Cheredina had provided a more detailed description of the plan’s parts and pieces. How wide were the streets? Were there alleys? Could the plan accommodate buildings that fit the angled streets, as Haussmann’s did in Paris? How much of the plan actually came to pass?

At the back of the book are short biographies of architects and thinkers who presumably influenced Chernyshev. Eighteen are Russian, but Ebenezer Howard, Walter Gropius, and Le Corbusier also appear. Hitler’s architect, Albert Speer is also present. That Speer is included indicates Chernyshev’s respect for the monumental classicism of his unbuilt designs for Hitler’s postwar Berlin.

Chernyshev designed two major projects in postwar Moscow in a neoclassical style - the Moscow State University complex on the Lenin Hills and the Moscow Automobile and Roadways Institute. He worked on many other projects as part of a "collective". But the dreariness of the present-day city comes both from a need after World War II for quickly produced factories and apartments and from a growing distaste in a socialist culture for the classical dreams of architects like Chernyshev. The architect soon "retired into honorable shadows", as one observer described it, and died in 1963.


Craig Whitaker, a New York-based architect and urban designer, is the author of Architecture and the American Dream.
текст: Craig Whitaker
Комментарии