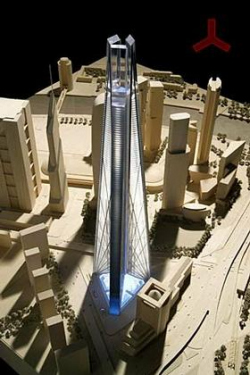 
If the symbolic importance of Foster & Partners' two projects in Moscow wasn't obvious, recent announcements made clear the significance that the city attaches to them. The first stone of the Rossiya Tower, a 118-story skyscraper at the heart of the growing business district, will be laid today, June 12—"Russia Day," a holiday that commemorates the adoption of the country's constitution—while construction on a redevelopment scheme in Zaryadye, near the Kremlin, is slated to begin on September 1, the day that traditionally marks the founding of Moscow.

Controversies have shadowed almost all Foster's ventures in the country, which include at least four other commissions, but none has elicited more litigation and debate than the Zaryadye project. This mixed-use complex on a 13-acre site replaces the Rossiya Hotel. Designed in mid-1960s by Dmitry Chechulin, the 3,000-room hotel was the largest in Europe. Its hulking frame obscured a pivotal approach to the Red Square ensemble. In December 2004, ST Development company bested three competitors with an $800 million bid to raze the structure and restore the area's original urban layout. It subsequently recruited Foster to oversee the redevelopment.

Foster's design traces the contours of the site's historical layout, introducing two axial streets that open visual pathways onto key landmarks including St. Basil's Cathedral and the rebuilt Cathedral of Christ the Savior. These wider streets thread the site, forming a triangular square in the center which is anchored by a concert hall. The rest of the development will include four hotels, extensive retail facilities, and a local museum. Its overall cost is estimated to exceed $1.5 billion.

But legal proceedings could derail it. Monab company, which also competed for the project in 2004, filed suit against the city alleging that improprieties took place during the bidding process. Acting on this complaint, Russia's Supreme Arbitration Court annulled the competition results last October. While Moscow's mayor Yuri Luzhkov says he will abide by the ruling for now, municipal authorities are appealing the decision to Russia's Constitutional Court. A separate decision is pending on the validity of the city's contract with ST.

Notwithstanding Zayadye, most of Foster's projects have been commissioned directly by well-connected developers, allowing it to sidestep some of the red tape that has encumbered other foreign firms in the past. Indeed, Foster has capitalized on the nation's booming construction market like no other architect.

But preservationists and other critics contend that there has been a downside to this direct access. They accuse Foster of minimally engaging the ideas of community members, leading to lackluster projects where its brand name is used to secure public adulation and swift official sanction—case in point, the Zayadye redevelopment. Although it restores the city grid, the complex's architecture is bland and derivative. The developer behind the project seems to have chosen the path of least resistance, critics say, harming the scheme's architectural merits and leaving its legal groundwork in doubt. 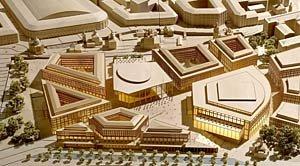